Communis and vulgaris are species names of many genera of plants. When so named, they usually refer to a type of plant which is quite common, ordinary or commonplace, not to the type of people who grow them 🙂
We often consider these plants to be nothing special and we’d sooner have something less ordinary in our gardens. The thing about common plants is that they tend to grow well in their native (or similar) regions. That’s why they’re so popular.

I’ve just spent the late summer and fall in the Balearic Islands of Spain and the  Pyrenees in France.
I drooled over the exotic species which surrounded me. Jacaranda trees, Oleander, Bougainvillea, Cacti…
Many of these exotics are available in good nurseries around Nova Scotia but they don’t come cheap. Some of them are featured in our Tropical Display bed at the Gardens.
In their preferred habitat they were so plentiful! So cheap! And oh so… common. The locals were perplexed by my enthusiasm for these ordinary plants. However what is common to some folk are exotic to others.

Is there anything more charming than coming upon a narrow stone lane with Bougainvillea spilling over a wall?
I’ve seen some atrocities committed against this rambling vine, pruning it to within an inch of its life to contain its natural exuberant tendencies.
Like a new love interest… forget about changing them. Love them for what they are or move on. 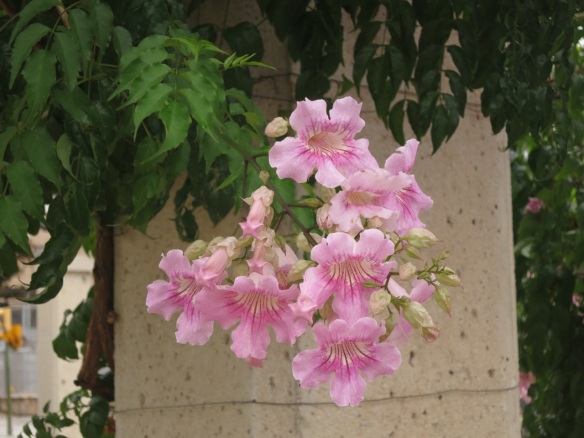 The Pink trumpet vine (Podranea ricasoliana) vine is as vigorous and commonly used as the Bougainvillea. It is the pale pink vine growing alongside the fuchsia Bougainvillea in the last photo.

The Nerium oleander (Oleander) was named because of its resemblance to the Olea (the olive tree, another VERY common plant in these parts. In fact it’s one of the main crops in the area).
In Mallorca the Oleander is as common as our Rugosa roses (Rosa rugosa) and is used in the same manner… as a hedge to screen busy roads. The difference being that rose hips are a beneficial supplement while all parts of the Oleander are poisonous. 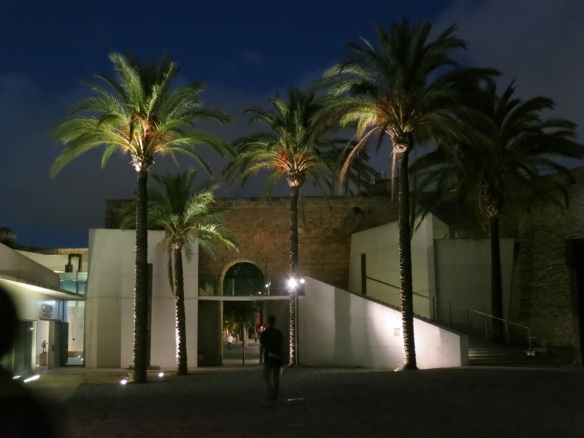 Palm trees are a common site in the Mediterranean. Unfortunately so is the red palm weevil which arrived in Spain in 1994 from Egypt and has since spread into France and Portugal. It now affects 50% of date palm growing countries in the world.

The red palm weevil has turned this palm tree into a dove perch. The weevils bore holes in the trunk affecting it’s vascular system and causing the canopy to die back, starting at the crown and moving onto the lower leaves.

Where space is at a premium.
Container gardening on balconies is often the only type of garden one can have. Drought resistant plants are the perfect solution in low water, high heat environments and the Med has many ‘common’ plants to fit the bill. Some results are less common than others. 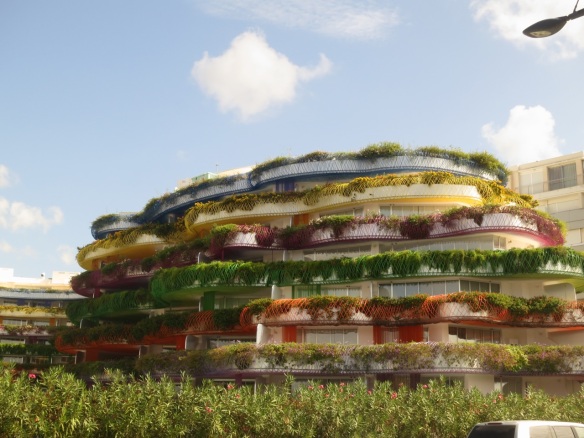 Balcony gardens come in many forms. This one is very simple (plant wise) and very striking.
(Note the Oleander hedge separating this apartment building from the road).

Chamaerops humilis (Fan palms) are the only palm trees native to Mallorca. They grow all over the island, particularly in the rocky slopes of the Tramuntana mountain range, though those are a shorter variety than this one.

I was first drawn to the Ceiba speciosa (Silk floss tree) because of its bulbous spiny trunk. The spines are water storing vessels.
Then I came upon these gorgeous orchid like flowers and when I looked beyond them, I realized they festooned the spiny trunk I was so mesmerized by.
I had been photographing them all over the island during the winter when they were leafless.

Who needs flowers when you have glorious orange glochids emerging from the smooth blue/green leaves of this Opuntia (prickly pear cactus). I’m not sure what variety this is but I’d like one.

Ceiba ,Chamaerops, and Eucalyptus trunks create interest in the gardens of Alfaiba even in the winter.

I thought this was a root but it turns out it’s a stalagmite formed by dripping water. This formation occurred outside, not in a cave. The water in Mallorca has a very high level of calcium carbonate and isn’t fit to drink untreated.

Behind some pretty plain facades are some beautiful courtyard gardens in Mallorca and Perpignan.
While this courtyard in an old historic building (now a Municipal government office) didn’t have any particularly interesting plants, it had some gorgeous hardscape features, including these painted tiles.
It also had the added feature of not being open to the public (unless you happen to be a friend of the person with the keys to the city… literally 🙂

I may have seen literally thousands of Bougainvilleas during my visit to Spain and France but there were times that they literally took my breath away.

A weeping Olea europaea (Olive tree) makes a simple but beautiful display, mimicking the spouting water.
A great garden, like a great meal, is more about what you create with the basic ingredients than the ingredients themselves.

The Public Gardens close their gates early this year. Sunday, November 16 in the early evening. If you get a chance, go in for a last walkabout.

The Friends will be hosting their annual Holiday Celebration on Thursday, December 11 from 5-7Pm at Horticultural Hall. Invites will be emailed later in the week but we wanted you to pencil us in.

We will have Public Gardens calendars for sale at the event and online. I will post on Facebook page and on our website when they go on sale

All copy and images copyright © Serena Graham-Dwyer, 2014. If you wish to use any part or whole of an image, in any manner, please contact us.