The Empress of India was the longest-serving British monarch. Queen Victoria was also the longest-serving female monarch in history, and is celebrated today.
The period during her reign is best known for her strict standards for personal morality  however it was also  a period of great strides and innovation in all aspects of the cultural and industrial life of the British Empire. The Victorians weren’t only busy inventing , discovering and collecting, but also sharing their information widely and cheaply.

This brought about  a renaissance in gardening and had a huge impact in its style and popularity.

John Loudon a prolific garden writer changed the way gardens looked in the UK. Instead of the naturalized spaces in existence, he encouraged his middle class readers to adopt a collectors approach to gardening, using non native plants and exotics. The Gardenesque style of gardening was born and fed, by the many inventions which emerged from this fertile period. Inventions, which introduced a huge number of new plants and different gardening  practices.

The Halifax Public Gardens personifies the Victorian gardens of the day, and in particular the Gardenesque style of gardening. Victorian gardens, including ours, shared many common elements.

This was the golden era of plant collecting. Plant hunters travelled the globe bringing home a plethora of brilliant, exotic and varied new plant material. Rhododendrons were introduced by Joseph Hooker who brought 28 new species from the Himalayas and began a craze.

The discovery of anilin dyes influenced both interior and exterior color combinations. With the introduction of so many new color choices in plants materials it became fashionable to mimic the new brilliantly colored interior carpets outside. As these new plants weren’t hardy to the UK, annual display beds became popular.

The invention of the Wardian case brought about a passion for exotics. This early terrarium vastly increased the survivability of plant material transported long distances by ship. Because of it the UK was flooded with new exotic plant varieties. Tropical display beds became fashionable in private and public gardens.
Glasshouses invented by Joseph Paxton in 1841 allowed wealthy gardeners to safely store these non-hardy exotics during the winter.

The rise of the middle class added fuel to the gardening fervor. Proud of their status, this  new educated middle class moved to the outskirts of cities where there was lots of space to garden and many opportunities to show their new  wealth.

Alleés were adopted from France, and lined walkways, driveways and canals. The parallel lines of trees served to protect the pale skin of its visitors, ensuring they wouldn’t be mistaken for the laborer class they once belonged to.

The invention of the lawnmower encouraged large green expanses with island beds placed for maximum visibility. The beds no longer had to be straight-edged, and elaborate shaped beds were born.

Dahlias were extremely popular and came to be known as the Queen of the gardens. By 1840’s there were over 500 Dahlias cultivars thanks to new hybridization methods. 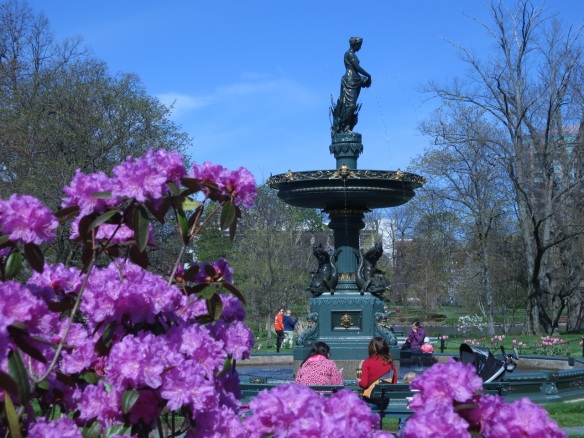 Ornamentation was another element typical of Victorian gardens. The Victoria Jubilee fountain was installed at the Halifax Public Gardens to celebrate Queen Victoria’s Diamond jubilee and was restored last year to celebrate another great monarch’s diamond jubilee… Queen Elizabeth II.

The Halifax Public Gardens became a National historic site in 1984 for being a rare surviving example of a Victorian Garden in the Gardenesque style.

All copy and images copyright © Serena Graham-Dwyer,  2013. If you wish to use any part or whole of an image, in any manner, please contact us.